In 2013, Professor Urban Alehagen and a team of researchers reported on the beneficial effects of daily supplementation of elderly Swedish citizens with a combination of 200 mg of Coenzyme Q10 and 200 mcg of selenium, in divided doses with meals, over a four-year period.

I am Jan Aaseth, a Norwegian medical doctor and university professor and researcher. In my career, I have specialized in medical biochemistry and in internal and occupational medicine. Much of my research focuses on the importance of micronutrient status throughout all stages of life. In recent years, I have investigated the role of selenium and coenzyme Q10 deficiency in the development of cardiovascular disease, with particular emphasis on oxidative stress and low-grade systemic inflammation.

In 2015, Professor Alehagen and I analyzed what we knew, as clinicians, about selenium and Coenzyme Q10 and heart disease [Alehagen & Aaseth 2015]. We asked ourselves why that combination had protected against heart disease in elderly people.

To start, we knew from the research literature that ischemic heart disease and heart failure are two conditions where increased oxidative stress plays a role. More about oxidative stress in a moment.

The results of the KiSel-10 study indicated that there exists an interrelationship between selenium and Coenzyme Q10, which makes it beneficial to administer them to populations with deficiencies of both.

First, it is important to give some background information about oxidative stress and antioxidants.

The cell signaling role of moderate numbers of reactive oxygen molecules contributes to good health and involves participation in the biosynthesis of complex organic molecules, detoxification of invasive chemical substances, and protection against pathogens such as bacteria and viruses [Nordman 2003].

Typically, the thing that contributes to the volatility of the reactive oxygen molecules is that they are seeking to attract and accept one or two electrons from other molecules. Whenever they steal electrons from molecules that then become unstable and seek to attract other electrons, they can start a harmful chain reaction and cause oxidative damage to the cells and their DNA, proteins, and lipids.

Consequently, our cells need the means to neutralize these reactive oxygen species that are produced in excess of the need for the beneficial cell signaling functions. The molecules that can safely scavenge free radicals are called antioxidants.

Antioxidants are molecules in their reduced state, the state in which they have electrons that they can donate without becoming unstable themselves.

The reduced state of Coenzyme Q10 molecules, called ubiquinol, and some of the selenium containing selenoproteins such as the glutathione peroxidases, the thioredoxin reductases, and selenoprotein P protect against oxidative stress.

Regenerating Ubiquinol with the Help of Selenium Containing Seleno-enzymes

Once the ubiquinol molecules donate electrons to quench reactive oxygen molecules, they themselves are oxidized. They have no electrons to donate and are stable. They become electron acceptors.

To replenish the supply of the antioxidant ubiquinol in the cells, it is necessary for some of these molecules in their oxidized state – called ubiquinone – to be regenerated in their reduced state – the electron donor state.

This is important because the mitochondria – those bean-shaped energy factories in the cells – are very vulnerable to oxidative damage. In heart disease, reactive oxygen species in the mitochondria and in the cytosol of the cells become distorted, leading to an oxidative imbalance, to mitochondrial dysfunction, and eventually to cell death [Alehagen & Aaseth 2015]. 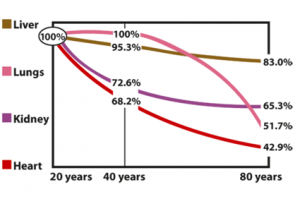 A study done by Kalén, Appelkvist, and Dallner has shown that Coenzyme Q10 content peaks in many organs at 20 years of age and is characterized by a continuous decline during further aging.

Elderly people may have a reduced reserve of ubiquinol for two reasons:

1. The cells’ endogenous synthesis of Coenzyme Q10 declines with increasing age such that an 80-year-old person may synthesize only one half the amount of the Coenzyme Q10 that a 20-year-old person does [Kalen 1989]. Elderly people synthesize less ubiquinone; consequently, there is less ubiquinone to be used for energy production and to be converted to the antioxidant state, ubiquinol.

2. Elderly people living in a region with low selenium content in the soil and the food may have less selenium and fewer selenoproteins available to regenerate ubiquinol from the available ubiquinone.

Ubiquinone – the oxidized state of Coenzyme Q10 – is essential to the production of ATP energy in the mitochondria. In the process of bio-energetics, the ubiquinone is reduced to ubiquinol.

When the ubiquinol molecules donate electrons to protect against oxidative damage, they revert back to their oxidized state – ubiquinone. The question then becomes, how to regenerate the antioxidant state of Coenzyme Q10.

One of the important interrelationships between selenium and Coenzyme Q10 (ubiquinone) is the catalytic role of selenoproteins such as the thioredoxin reductases in the metabolic conversion of ubiquinone to ubiquinol.

Xia et al. [2003] showed that thioredoxin reductase is the most efficient enzyme that reduces ubiquinone to ubiquinol.

Coenzyme Q10 Needed for the Synthesis of the Antioxidant Seleno-Enzymes

Just as we need sufficient quantities of selenoproteins to regenerate ubiquinol, so too do we need adequate quantities of Coenzyme Q10 for the optimal synthesis of the selenocysteine-containing enzymes [Moosmann & Behl 2004].

In our 2015 article, Prof. Alehagen and I explained that there exists a special interrelationship between Coenzyme Q10 and selenium containing selenoproteins as follows:

Moosmann and Behl [2004] have shown that the synthesis of the selenocysteine containing selenoproteins proteins requires a functional mevalonate pathway.

Note: The mevalonate pathway is the biological pathway in which cholesterol, Coenzyme Q10, and dolichol are produced.

If the mevalonate pathway is not functioning optimally, there will not be enough Coenzyme Q10 synthesized and not enough selenocysteine produced for incorporation into selenoproteins.

Selenium Needed for the Synthesis of Coenzyme Q10

We cannot deprive humans of selenium to see what effect selenium deficiency has on Coenzyme Q10 bio-synthesis.

Vadhanavikit and Ganther [1994] have done animal studies that show that selenium deficiency – animals fed a diet lacking selenium for 18 months – is associated with levels of Coenzyme Q9 and Coenzyme Q10 in the liver that were 40% and 67% of the levels in selenium-adequate animals, respectively. These results are similar to the findings using a shorter feeding period (4.5 months).

Vadhanavikit and Ganther speculated that a decreased ability of the cells to synthesize Coenzyme Q10 because of selenium deficiency is associated with a lack of glutathione peroxidase protection against oxidative stress in the cells.

About the Author: Jan Aaseth

Dr. Jan Aaseth is a professor and researcher at both the Research Department, Innlandet Hospital Trust, Brumunddal, Norway, and the Inland Norway University of Applied Sciences, Lillehammer, Norway.