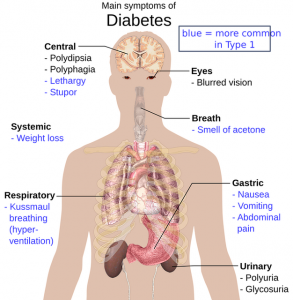 A randomized controlled study carried out at the University of Guadalajara, Mexico, showed that daily adjunctive treatment with 400 milligrams of Coenzyme Q10 for six months significantly reduced the extent of lipid peroxidation in patients diagnosed with non-proliferative diabetic retinopathy.

Patients with diabetic retinopathy who took 400 milligrams of Coenzyme Q10 (ubiquinone form) daily had significantly reduced levels of lipid peroxidation products in their blood at the end of a six-month study, compared to baseline levels [Rodriguez-Carrizalez 2016].

Diabetic retinopathy is an eye disease caused by high blood sugar levels resulting in damage to the blood vessels in the retina. The blood vessels can swell and leak, or they can close off and stop the blood from flowing.

Why is Coenzyme Q10 important?

Secondly, there is a known relationship between increased products of lipid peroxidation and the increasing severity of diabetic retinopathy.

In diabetic retinopathy, there is a serious imbalance between oxidants and antioxidants.

Six months of daily adjunctive treatment of diabetes patients with 400 milligrams of Coenzyme Q10 corrected the imbalance and significantly reduced the extent of the oxidative stress [Rodriguez-Carrizalez 2016].

Note: Oxidative stress is the bio-medical term for an imbalance between pro-oxidants and antioxidants in the body.  Oxidative stress causes damage to cells and cell membranes, lipids, proteins, and DNA.

Coenzyme Q10 is a fat-soluble antioxidant that neutralizes harmful free radicals.  The role of Coenzyme Q10 as an antioxidant is even more important if, as in the case of extensive lipid peroxidation, the protective action of the enzymatic antioxidants superoxide dismutase, glutathione peroxidase, and catalase is impaired.

Coenzyme Q10 nutritional supplement in the form of ubiquinone

In this study, the nutritional supplement Coenzyme Q10 was given in its well-documented oxidized form, ubiquinone. Dr. William Judy, founder and president of the SIBR Research Institute, has explained how the ubiquinone form, once ingested and absorbed, is converted to the reduced form, ubiquinol, which has antioxidant properties in the blood [Judy 2007].

The researchers reported that the six-month adjunctive treatment with 400 milligrams of Coenzyme Q10 daily was both safe and effective at improving the body’s antioxidant defense.

Oral administration of the Coenzyme Q10 supplement improved significantly the imbalance between oxidants and antioxidants that existed at the beginning of the study [Rodriguez-Carrizalez 2016].

Disclaimer: The information presented in this review article is not intended as medical advice and should not be regarded as such.