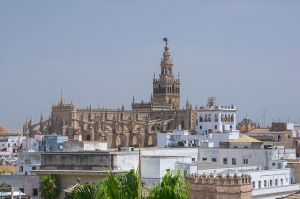 Sevilla is famous for its cathedral, Santa Maria de la Sede, the largest Gothic cathedral in the world, built during the 15th century. Sevilla is also famous for its university. Within the university, the Developmental Biology Institute has been doing much research into the nutritional and medical importance of Coenzyme Q10.

Spanish researchers at the Pablo de Olavide University in Sevilla hypothesized that the effect of physical activity on plasma Coenzyme Q10 levels and on plasma Coenzyme Q10/cholesterol ratios might vary according to the age of the individuals engaging in the physical activity. Their results show, for the first time, an apparently different effect of exercise on young people and on older people.

Coenzyme Q10 and physical activity in young people
In the Spanish study, the young participants had an average age of 20 years plus or minus 2 years.  Two possible explanations come to mind for the lower plasma Coenzyme Q10 levels in highly active younger people:

Coenzyme Q10 and older people and the aging process
Coenzyme Q10 is important in the aging process.  There can be little doubt about that.  Once into adulthood, the human body’s synthesis of Coenzyme Q10 decreases with increasing age [Kalen 1989].  Supplementation of the Mediterranean diet with Coenzyme Q10 is associated with significant reduction of oxidative damage and inflammation in elderly adults [Yubero-Serrano 2011, 2012].  Supplementation of healthy elderly adults with a combination of Coenzyme Q10 and selenium is associated with a number of significant health benefits [Alehagen 2013, Johansson 2013]:

Antioxidant Defense.
Moreover, as our cells produce energy, they necessarily produce a harmful by-product called free radicals, also known by the name reactive oxygen species.  As we get older, the cumulative effect of the oxidative damage that these free radicals do to the cell structure and to the cell DNA can build to the point of causing degenerative diseases.  Coenzyme Q10 is an important lipid-soluble antioxidant that neutralizes many of the most harmful free radicals in cell membranes and in lipoproteins [Singh 2005, Navas 2007, Turunen 2004]. The Spanish study shows that, in older adults, higher levels of exercise are associated with high levels of plasma Coenzyme Q10 and with higher Coenzyme Q10-to-cholesterol ratios in plasma.

Exercise to increase plasma Coenzyme Q10 levels
The Spanish study is interesting because it provides an additional rationale for recommending that older adults engage in physical activity: to stimulate the body’s synthesis of Coenzyme Q10.

We do not know of any hormonal stimuli to increase the body’s synthesis of Coenzyme Q10 in humans.  Exercise, on the other hand, seems to provide such stimulation.

Caveat: Of course, the ability to increase plasma Coenzyme Q10 levels with exercise will depend upon the individual’s health status and will vary from individual to individual.

Coenzyme Q10 supplement still needed
Nothing is quite as impressive as the evidence from a well-designed randomized, double-blind, placebo-controlled clinical study such as the KiSel-10 study reported by Dr. Urban Alehagen and his team of researchers at the university in Linköping, Sweden.  The results from their 443-person study show that daily supplementation with 200 milligrams of Coenzyme Q10 (in the form of ubiquinone) and 200 micrograms of an organic high-selenium yeast is associated with significantly improved heart health and heart function.