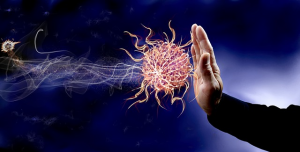 Effects of Coenzyme Q10 on innate immune activity
Professor Annelie Brauner and a group of researchers at the renowned Karolinska University in Sweden have reported on the results of a clinical trial enrolling patients with diabetes, both type I and type II diabetes.  The patients were all in their 50’s.

The researchers investigated the influence of Coenzyme Q10 supplementation on antimicrobial peptides and natural killer cells – both components of the innate immune system – in diabetes patients.

Coenzyme Q10 and innate immune activity
Typically, immune system activity is characterized as being one of two types:

In the Brauner study, supplementation with Coenzyme Q10 was associated with the normalization/improvement of NK cell receptor levels and with an increase in NK cell activity.

Dr. William Judy at the International Coenzyme Q10 Association conference in Bologna, Italy.   Dr. Judy says that the high concentration of reduced Coenzyme Q10 in the blood provides an immense protection of blood cells from oxidative stress and possibly prevents mutations of the white cells that result in leukemia.