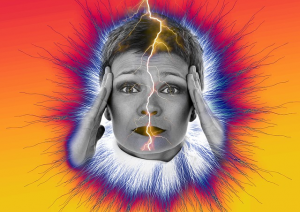 The migraine headache is characterized by severe throbbing pain, which is usually experienced on just one side of the head. Other symptoms include nausea, vomiting, and sensitivity to light and sound. Migraine attacks can last for many hours and even for days, and the pain can be so severe that it is disabling. Clinical studies have shown that daily Coenzyme Q10 supplements can help to reduce the frequency, the duration, and the intensity of migraine headaches.

Migraine headaches are more than just really bad tension-type headaches.  Migraine is a disabling neurological disease that keeps its victims from living and working normally.

Despite the prevalence and economic expense of migraine headaches, there are few medications approved to prevent its occurrence, and even fewer medications that do not have potentially serious adverse effects [Shoeibi].

Among the nutritional supplements that may be effective in reducing the frequency and severity of migraine headaches, three seem to have shown some preliminary benefits, sometimes in combination [Shoeibi; Guilbot]:

In the article that follows, I want to summarize the most recent clinical studies showing positive outcomes of nutritional supplementation.

Coenzyme Q10 as an adjunctive treatment for migraine

There were no adverse effects of adding the Coenzyme Q10 treatment to the regular treatment.  Coenzyme Q10 as an adjuvant treatment reduced the frequency, the duration, and the intensity of the migraine attacks [Shoeibi 2017].

The Coenzyme Q10 supplementation was also associated with a significant improvement in the frequency, the severity, and the duration of the migraine attacks [Dahri 2018].

With the Coenzyme Q10 supplementation, six out of ten migraine patients had more than a 50% reduction in the number of days with migraine headaches. There were no side-effects associated with Coenzyme Q10 [Rozen 2002].

Coenzyme Q10 and magnesium in combination for migraine

Dr. Gaul and a team of researchers randomly assigned 130 adult migraine patients (3 or more migraine attacks per month) to an active treatment group or to a placebo group.  After a four-week run-in period in which the patients received no prophylactic treatment, the patients in the active treatment group took a daily nutritional supplement for three months that contained vitamins and minerals including the following ingredients:

The three months of active treatment resulted in a reduction in the number of migraine days from 6.2 to 4.4 days, which showed a trend towards statistical significance and may well have clinical significance.

Furthermore, the symptoms and the intensity of the migraine headaches were significantly reduced in the active treatment group [Gaul 2015].

Dr. Bianchi and colleagues reviewed published open clinical trials and concluded that the combination of Coenzyme Q10, magnesium, riboflavin, and vitamin B12 has therapeutic potential for the prevention or attenuation of migraine headaches [Bianchi 2004].

Coenzyme Q10 for migraine prevention in children and adolescents

Dr. Hershey et al assessed the Coenzyme Q10 status in 1550 younger migraine patients.  The average age of the patients was 13.3 years plus or minus 3.5 years.  The patients ranged in age from 3 to 22 years.

Dr. Hershey and the research team recommended that younger migraine patients with low Coenzyme Q10 concentration be treated with one to three milligrams of Coenzyme Q10 per kilogram of body weight per day.

Follow-up of the younger migraine patients on the Coenzyme Q10 supplementation showed the following results:

Summary of the Coenzyme Q10 and migraine clinical studies

Administering Coenzyme Q10 to migraine patients – as a single agent, as an adjunctive treatment, and/or in combination with other nutritional supplements such as magnesium and riboflavin – has shown positive results.

It seems likely that mitochondrial dysfunction plays a role in the pathophysiology of migraine.  Published clinical study results show that daily supplementation with Coenzyme Q10 can produce significant improvement in migraine patients [Littarru 2007].