Coenzyme Q10 is a vitamin-like substance that is found in all human tissues, with the highest concentrations in the heart, brain, kidney, and liver. 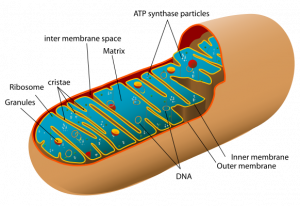 The mitochondria (singular: mitochondrion)  in our cells are known as the “powerhouses of the cell.” Mitochondria produce the energy needed for the functioning of the cells. Basically, they do this via chemical reactions that convert glucose to ATP energy molecules. Coenzyme Q10 is essential to this process.

Coenzyme Q10 supports mitochondrial function in the cells through its essential role in the generation of ATP energy. It is also a powerful lipid-soluble antioxidant, protecting the cells against damage caused by harmful free radicals [Xu 2022].

Unfortunately, in middle age and in the senior years, the cellular bio-synthesis of Coenzyme Q10 declines with increasing age [Kalen 1989]. One estimate suggests that the bio-synthesis of Coenzyme Q10 in heart muscle cells is reduced to half at 80 years [Alehagen 2021]. It is practically impossible to replace the lost endogenous Coenzyme Q10 by improving dietary intakes: there is a definite need for daily supplementation with a bio-available CoQ10 supplement [Mantle & Dybring 2020].

Mitochondrial dysfunction – defined as a reduced capacity for the cellular generation of ATP energy and increased vulnerability to oxidative damage caused by harmful free radicals – plays a role in the development of a number of neurodegenerative disorders, including Parkinson’s disease, Alzheimer’s disease, amyotrophic lateral sclerosis, multi-system atrophy, and progressive supranuclear palsy [Mantle & Hargreaves 2022].

A case-control study of approximately 6000 Japanese citizens aged 40-69 years at baseline has shown that low serum CoQ10 concentrations were inversely linked to the risk of developing dementia. There was a similar association between low CoQ10/total cholesterol ratio and the risk of dementia [Yamagishi 2014].

As of late 2022, no large clinical studies have assessed the effect of CoQ10 supplementation on cognitive decline and dementia [Mantle & Hargreaves 2022].

Various studies show reduced concentrations of Coenzyme Q10 in the cerebral cortex and in the plasma and platelets in patients with Parkinson’s disease [Mantle & Hargreaves 2020].

Note: Phase II tests are designed to test efficacy of an experimental drug on a particular disease or condition in 100 to 300 volunteers over a period of several months to two years.

Phase III tests are designed to test the safety and efficacy of an experimental drug at multiple centers with several hundred to several thousand patients.

Clinical studies have shown reduced CoQ10 concentrations in the plasma and in the postmortem brain tissue of patients with multiple systems atrophy [Mantle & Hargreaves 2022].

As of late 2022, there have been no reports of randomized controlled trials of CoQ10 supplementation of patients with multiple systems atrophy [Mantle & Hargreaves 2022].

The current state of the research literature is unsatisfactory. Despite evidence that reduced blood and tissue concentrations of Coenzyme Q10 are common in patients with neurodegenerative disorders, there have been very few randomized controlled trials of the effect of CoQ10 supplementation on these patients. The few clinical trials that have been conducted have given contradictory results [Mantle & Hargreaves 2022].

The hitherto lack of efficacy of Coenzyme Q10 in the treatment of neurodegenerative diseases may reflect the need for a formulation and a form of administration that enables the supplemented Coenzyme Q10 to cross the blood–brain barrier [Mantle & Hargreaves 2022].

Moreover, it may be that the administration of Coenzyme Q10 to patients with neurodegenerative disorders would be more effective in combination with other micronutrients such as selenium or carnitine. There is, for example, research evidence of a synergistic interaction between Coenzyme Q10 and selenium [Alehagen & Aaseth 2015].

The best estimate for a therapeutic effect of Coenzyme Q10 on neurodegenerative diseases is that the supplementation would need to increase plasma/serum CoQ10 concentrations to 3.5 mg/L [Langsjoen 2014, p. 16].

Mantle D, Dybring A. Bioavailability of Coenzyme Q10: An overview of the absorption process and subsequent metabolism. Antioxidants (Basel). 2020 May 5;9(5):386.