Coenzyme Q10 and the Heart Muscle 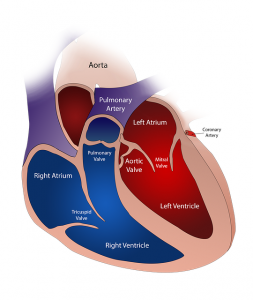 What does Coenzyme Q10 do for the heart muscle?  Quite a lot, it turns out.

Coenzyme Q10 supplementation has been shown in clinical trials to have the following effects with benefit for the heart:

Let’s look more closely at these effects of CoQ10 supplementation.

Ejection fraction is the percentage of the blood that the heart muscle is able to pump out with each heart beat [Cleveland Clinic].

To these studies, we can add the 2019 sub-group analysis of the European participants in the Q-Symbio Study. The Q-Symbio Study investigated the effect of Coenzyme Q10 on morbidity and mortality in chronic heart failure. That analysis also showed a significant effect of CoQ10 supplementation on the patients’ ejection fraction [Mortensen 2019].

Researchers in a 2006 study found that CoQ10 supplementation – 3 times 100 milligrams per day – was effective in ameliorating endothelial dysfunction and functional impairment in patients with stable moderate chronic heart failure.  Endothelium-dependent relaxation of the brachial artery improved significantly in the CoQ10-treated patients; the improvement in the endothelium-dependent relaxation after CoQ10 supplementation was positively correlated with increase in plasma CoQ10 levels [Belardinelli].

Three clinical trials of CoQ10 supplementation for heart failure patients have shown slight but not statistically significant improvement in the patients’ NYHA category [Fotino].  But the improvement could be clinically relevant.

Researchers gave cardiac surgery patients 300 milligrams of Coenzyme Q10 daily or matching placebos for two weeks prior to the surgery.  As part of the study, they excised small samples of heart muscle tissue from the right atrium of the patients’ hearts and subjected the tissue to hypoxia (a reduced oxygen environment) for 30 minutes.  The purpose of the imposed hypoxia was to simulate the condition of a heart attack. Then the researchers re-oxygenated the tissue and measured the contractile recovery of the tissue [Rosenfeldt].

Researchers enrolled healthy volunteers, non-smokers with no history of bleeding disorders or recent drug administration, in a study in which the volunteers took 2 times 100 milligrams of Coenzyme Q10 daily for 20 days. Blood analysis showed that the CoQ10 supplementation – which raised plasma CoQ10 levels threefold – is associated with the inhibition of platelet activity in terms of cell-size distribution and in terms of the surface expression of vitronectin receptors [Serebruany].

Platelets, also called thrombocytes, are the component in the blood that reacts to bleeding. Platelets clump together to form blood clots to stop bleeding.

Without CoQ10 supplementation, there is a risk of reduced ATP energy production (and reduced energy for the muscles including the heart muscle) as well as a risk of reduced antioxidant protection of mitochondrial DNA against damage by harmful free radicals [Okuyama]. Dr. William V. Judy, founder and president of SIBR Research Institute, has described the Q-Symbio heart failure study as the best Coenzyme Q10 clinical research study we have. Dr. Judy is also much impressed by the KiSel-10 senior citizens study.

The prevention and treatment of cardiovascular disease is the primary focus of Coenzyme Q10 clinical research.  Coenzyme Q10 has been found to be an independent predictor of mortality in heart disease patients.  The beneficial effects of CoQ10 supplementation for heart patients are associated with Coenzyme Q10’s bio-energetics function, antioxidant role, anti-inflammatory role, and role in maintaining endothelial function [Littarru].

The Q-Symbio Study has shown that daily supplementation with 3 x 100 milligrams of Coenzyme Q10 for two years significantly improves the symptoms and survival of chronic heart failure patients [Mortensen 2014].

The KiSel-10 Study has shown daily supplementation with a combination of 2 x 100 milligrams of Coenzyme Q10 and 200 micrograms of an organic high-selenium yeast for four years significantly reduces cardiovascular mortality, improves heart function, and improves health-related quality of life [Alehagen].