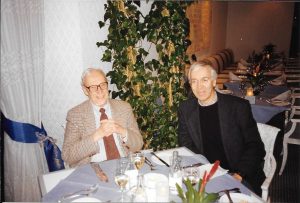 We know this from the documented results of randomized, double-blind, placebo-controlled studies [Morisco; Munkholm; Mortensen].

Dr. Judy and Dr. Svend Aage Mortensen, in separate studies in the late 1980s and early 1990s, had the same experience:

To the surprise of the researchers – this was still early days in Coenzyme Q10 research – many of the heart failure patients, deprived of the extra Coenzyme Q10, had suffered a relapse [Judy; Mortensen].

These clinical results – clinical relapse after the cessation of Coenzyme Q10 therapy – led the leading Coenzyme Q10 researchers in the 1990’s, Dr. Karl Folkers, Dr. William Judy, Dr. Per Langsjoen, Dr. Gian Paolo Littarru, Dr. Svend Aage Mortensen among them, to the conclusion that Coenzyme Q10 supplementation has to be a “life-long therapy for heart failure patients.”

Dr. William V. Judy, president of the SIBR Research Institute, has been involved in Coenzyme Q10 clinical research from the beginning. He has supervised important studies of the effect of Coenzyme Q10 on heart failure patients, cardiac surgery patients, and low-energy syndrome patients.

Dr. Judy told me the most fantastical story, which, incidentally, has been reported in the Texas Monthly magazine [Sharpe].  It seems that the US FDA completely misunderstood the implications of the cases of clinical relapse when heart failure patients had been taken off Coenzyme Q10 adjunctive therapy. The FDA moved to ban the use of Coenzyme Q10 supplements [Judy; Sharpe].

The, following the lead of the US FDA, the Texas Department of Health attempted to remove Coenzyme Q10 nutritional supplements from retail shelves in Texas [Sharpe].

Several things happened in reaction to the removal of Coenzyme Q10 from retail store shelves.

To recapitulate, the crucial sequence seen in the clinical trials was threefold:

The data from more recent clinical trials has confirmed that Coenzyme Q10 is a safe and effective adjunct therapy for heart failure patients:

Then I thought: many more Americans need to be taking a well-formulated daily Coenzyme Q10 supplement.

I am taking the daily Coenzyme Q10 supplement because I do not want to get heart failure.

Disclaimer: The information in this review article is not intended as medical advice and should not be construed as such.