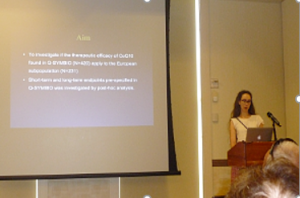 Biochemist Anne-Louise Mortensen shows that serum Coenzyme Q10 levels above 3.0 micrograms per milliliter can be achieved through daily supplementation with 300 milligrams of a patented ubiquinone Coenzyme Q10 supplement. The outcomes of the long-term supplementation of chronic heart failure patients were reduced risk of death from heart disease, reduced risk of death from all causes, reduced incidence of hospitalization, and reduced incidence of other major adverse cardiovascular events.

The Q-Symbio randomized, double-blind, placebo-controlled study of the effect of Coenzyme Q10 adjunctive treatment on the symptoms, adverse cardiovascular events, and survival of chronic heart failure patients is the single best Coenzyme Q10 clinical study that we have.

The Q-Symbio study was a two-year multi-center study enrolling 420 patients with moderate to severe heart failure.  The patients were randomly assigned to an active treatment group receiving 100 milligrams of Coenzyme Q10 three times a day or to a group taking matching placebos three times a day [Mortensen 2014].  The Coenzyme Q10 or placebo treatment was given in addition to the conventional heart failure medication.  The patients were recruited for the study in several European, Asian, and Australian countries.

Outcomes of the total Q-Symbio study

Adequate levels of Coenzyme Q10 are needed for the normal functioning of almost all cells and especially for the normal functioning of the heart muscle cells, which have a constant need for energy.  The Q-Symbio study results demonstrate that adjunctive treatment with Coenzyme Q10 addresses the problems caused by low levels of Coenzyme Q10 in heart muscle cells, thus helping the heart failure patients to produce the cellular energy that they need [Mortensen 2015].  In contrast to other drug therapies that are designed to block or reduce some aspect of cellular activity, Coenzyme Q10 supplementation improves cell function.

The European patients in the Q-Symbio Study

Aware that there have been geographical variations in the patient characteristics and in the management of patients in heart failure studies, the Danish bio-chemist Anne Louise Mortensen separated out the data for the European heart failure patients who participated in the Q-Symbio study.  Her purpose was to compare the response of the more homogeneous European sub-population of the Q-Symbio study with the response of the total Q-Symbio study population [Mortensen 2018].

For example, the risk of a major adverse cardiovascular event was nearly two times lower and the risk of hospitalization was seven times lower in the European sub-population than in the total Q-Symbio population.

When the results of the Q-Symbio study (improved symptoms and survival for heart failure patients) and the results of the equally important KiSel-10 study (reduced risk of death from heart disease for healthy elderly individuals) are considered, it becomes apparent that daily Coenzyme Q10 supplements are the most important nutritional supplements we have for good heart health.

Both studies were conducted using a patented ubiquinone supplement with the same composition and the same formulation that has shown superior absorption and bio-availability in the study done by Professor Lopez-Lluch and a team of researchers in Sevilla, Spain.

Disclaimer: the information presented in this article is not intended as medical advice and should not be construed as such.