Dr. William V. Judy, founder and president of SIBR Research, writes as a guest columnist for Q10facts.com. Dr. Judy has done clinical research in the Coenzyme Q10 adjuvant treatment of patients with heart failure, chronic fatigue syndrome, and prostate cancer. He has supported Prader-Willi children with Coenzyme Q10 therapy. He is the author of the 2018 book Coenzyme Q10: An Insider’s Guide, which is available on amazon.com. ISBN 978-87-7776-186-7.

The question that I get asked about the most is whether there is any benefit from supplementing with Coenzyme Q10 if a person does not have a diagnosed CoQ10 deficiency?

Yes, I think there is a benefit. We should not be waiting until an obvious CoQ10 deficiency manifests itself. Instead, we should be giving people in their 40s and above the following advice:

We know that humans’ plasma CoQ10 levels are very variable. For example, the Indian population has generally low plasma levels because of their vegetarian diet. Populations with high protein diets and populations that live is cold climates, on the other hand, tend to have higher plasma CoQ10 levels. But, again, there is considerable individual variability.

What are Symptoms of a Possible CoQ10 Deficiency?

Adequate Coenzyme Q10 in the tissue cells is necessary for cellular energy production. If you are feeling tired even though you have not been exerting yourself physically or mentally, and if sleep is not helping you to feel refreshed and alert, and if you can no longer get as much done during the day as you would like, then you need to consult a physician. A CoQ10 deficiency or insufficiency may be an underlying cause.

I believe that CoQ10 deficiencies increase the probability of our developing clinical conditions that are not caused by pathogenic organisms and toxic cellular environments. 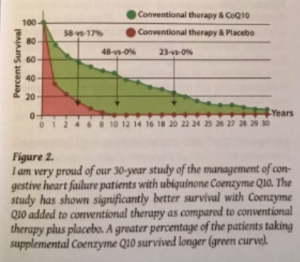 The Benefits of CoQ10 Supplementation

As mentioned above, CoQ10 supplementation can improve clinical conditions that are related to a low-energy syndrome; chronic heart disease and chronic fatigue syndrome are prominent among them.

Beyond the obvious clinical conditions, there could be benefits in the maintenance of cellular health as a result of the energy production and antioxidant functions of Coenzyme Q10. Another possibility is the function of Coenzyme Q10 in the immune system [Folkers 1985b].

I recall a study in which CoQ10 supplementation increased the antibody response in humans vaccinated against hepatitis B with up to 57% [Barbieri 1999].

We also know that Coenzyme Q10 prevents the mutation of the NQO-1 gene that controls the NQO-1 protein activity that regulates the synthesis of enzymes that drive the CoQ10 redox mechanism [Ross 2017].

I have no doubt that many of the readers of q10facts.com need a daily CoQ10 supplement.

I want to caution the readers: not all CoQ10 supplements are equally good. Much depends on the formulation of the supplement [Lopez-Lluch 2019]. Thus, documentation of a CoQ10 product’s absorption and bioavailability is important.

Last Word: The Body is a Group of Adaptive Systems

The body is an adaptive group of functional systems. Small function changes are occurring in cells all the time. However, these changes do not cause detectable symptoms. These are what is called silent clinical conditions (hypertension, diabetes, atherosclerosis, neuropathy). Our bodies adapt to the small changes. Thus, we never know what is happening in our cell until the critical level of system failure occurs. It is essential that the energy level and antioxidant functions of all cells are optimal to prevent cell death and to stimulate cell repair. The energizing and antioxidant functions of CoQ10 are essential for maintaining the optimal functional characteristics of the body.

Alehagen U, Aaseth J, Johansson P. Less increase of copeptin and MR-proADM due to intervention with selenium and coenzyme Q10 combined: Results from a 4-year prospective randomized double-blind placebo-controlled trial among elderly Swedish citizens. Biofactors. 2015b; 41(6):443-52.

The information presented in this article by Dr. Judy is not intended as medical advice and should not be construed as such.

You can read more about Dr. Judy  here