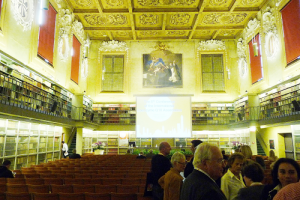 Bio-medical researchers attended the 8th conference of the International Coenzyme Q10 Association in Bologna, Italy, from October 8 to October 11, 2015. The conference was held under the auspices of the University of Bologna, the oldest university in Europe.

There is still not enough scientific evidence to choose ubiquinol over ubiquinone.  That is the take-away lesson from the International Coenzyme Q10 Association conference held in Bologna last week.  Among the presenters at the conference, the split was between the advocates of the ubiquinone form of Coenzyme Q10 and the advocates of the ubiquinol form. The assembled bio-medical researchers and doctors and professors made their presentations and showed their posters, but, when it came down to it, there were no studies showing that the ubiquinol form should be the preferred form for a Coenzyme Q10 supplement.

The results of the Q-SYMBIO study
Professor Franklin Rosenfeldt, Monash University, Australia, a cardiac surgeon and one of the lead researchers on the Q-SYMBIO study presented information about the methods and results and future implications of the study.  In the Q-SYMBIO study, researchers gave class III and IV heart failure patients 300 mg of pharmaceutical-grade ubiquinone Q10 dissolved in vegetable oil daily for two years. The patients took their Q10 supplements in 100 mg doses three times a day with their meals.

The use of the ubiquinone Q10 supplements as an adjunctive therapy – that is to say, in addition to the conventional heart failure medications – significantly improved the symptoms and the survival of the heart failure patients as compared to placebo.  The Q-SYMBIO study showed convincingly that adjunctive therapy with ubiquinone Q10 supplements is effective, is safe and well-tolerated, and is affordable.

“What we were presented was experiments done on mice, a study without a genuine use of the placebo group, a study without a significant effect, and a study of a type in which ubiquinone previously has shown the same effect as the ubiquinol did.”

Gold standard ubiquinone studies: Q-SYMBIO and KiSel-10
We now have some big gold standard studies done with the ubiquinone Q10.  Both the Q-SYMBIO study and the KiSel-10 study were randomized, double-blind, placebo-controlled studies.  The researchers in those studies made every effort to ensure that the only difference between the two experimental groups was the difference in the intervention. The participants in the studies got the active ubiquinone Q10 treatment, or they got the placebo treatment.  No one, neither doctor nor patient, knew until the end of the study who had gotten the real thing and who had not.

But, at the same time, under the radar, we have produced greater and greater numbers of heart failure patients at least in part because the statin medications inhibit not only the bio-synthesis of cholesterol but also the bio-synthesis of Coenzyme Q10.  The result is the increasingly energy-starved heart that Dr. Svend Aage Mortensen thought was the fundamental underlying cause of heart failure.

There is some evidence to suggest that supplementation of statin patients with a well-absorbed Q10 preparation can ameliorate the adverse effects of the statin medications.

Dr. Mortensen, who would have been 73 years old on August 31, 2015, died of infection and complications on April 22, 2015, following heart valve replacement surgery.

Dr. William Judy’s remarks at the conference
Sunday forenoon, October 11th, the last agenda item on the conference program was the “Multi-disciplinary Discussion: Ubiquinone vs. Ubiquinol.”  Dr. William Judy, founder and chairman of the SIBR Research Institute and long-time Coenzyme Q10 researcher, was at the podium to shed light on the relative merits of the two forms of Q10. Dr. and Mrs. William Judy together with researcher Dr. Anne Louise Mortensen at the Bologna conference

Discussion dominated by non-science people
Unfortunately, the scientific discussion of the merits of ubiquinone and ubiquinol at the conference was hijacked by a couple of participants without a scientific background. These individuals dominated the discussion but did not provide empirical evidence for their assertions.

Exhortation by Professor Littarru: do research!
Professor Gian Paolo Littarru ended the discussion prematurely by exhorting the Q10 researchers to do the research and provide the clinical data needed to settle the question of whether the best ubiquinol supplement can match or exceed the absorption and effects of the best ubiquinone supplement.  At present, there is no ubiquinol preparation that has been approved as a medicine in the way that the ubiquinone preparation used in the Q-SYMBIO study and in the KiSel-10 study has been.