Is Coenzyme Q10 something of a black swan? 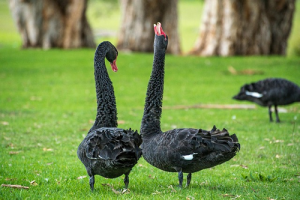 There was a time, before Cook discovered Australia, when we thought that all swans are white. Coenzyme Q10 is something of a black swan. For many people, CoQ10’s existence is unknown, and its massive beneficial health effects for heart disease patients are unknown. Coenzyme Q10 is a bio-nutrient that is used as an adjunct to conventional medicines. The Australian researcher Dr. Franklin Rosenfeldt has published extensively on the impact of Coenzyme Q10 supplementation.

Prof. Franklin L. Rosenfeldt, Baker Heart Research Institute, Alfred Hospital, Monash University, Australia, is known to the readers of the articles on this website.  Dr. Rosenfeldt focuses in on the role of Coenzyme Q10 in cardiovascular health and disease.  He is interesting because his research has shown the efficacy of supplementation with Coenzyme Q10 in the following situations:

In this article, I would like to highlight some of the research results that Professor Rosenfeldt and his team of researchers in Australia have achieved.

Coenzyme Q10 in cardiac surgery
Dr. Rosenfeldt and his team reviewed 8 studies of the use of Coenzyme Q10 supplements with heart surgery patients.  7 of the 8 studies showed beneficial effects of one kind or another. The researchers in the 8th study had used Coenzyme Q10 only 12 hours before surgery, too short a preparation period, in Dr. Rosenfeldt’s opinion, for the Coenzyme Q10 to take effect. Dr. Rosenfeldt and his team have achieved good results by using Coenzyme Q10 for an average of 36 days prior to surgery, and they have continued the Q10 adjuvant treatment following surgery. Their concern has been to prevent or limit the damage of ischemia/reperfusion injury (the heart tissue damage caused by the sudden return of blood to the tissue after a period of less or no blood and oxygen in the tissue).

Please note that Dr. Rosenfeldt’s research results were published in the widely read, by cardiologists and cardiac surgeons, Journal of Thoracic and Cardiovascular Surgery.

Coenzyme Q10 in chronic heart failure
Dr. Rosenfeldt was one of the key researchers on the Q-Symbio clinical trial, a randomized, double-blind, placebo-controlled, multi-centre study reported in 2014 in the Journal of the American College of Cardiology specialty journal entitled Heart Failure. He worked closely with Dr. Svend Aage Mortensen, the lead researcher on the Q-Symbio Study.

The Q-Symbio study enrolled 420 patients with severe chronic heart failure (NYHA classes III and IV) from nine countries, including Australia, and gave the patients either 100 mg of Coenzyme Q10 three times a day or corresponding placebo for a period of two years in addition to their conventional medicines.

The Q-Symbio results showed statistically significant reductions in the number of unplanned hospitalizations and in the number of cardiovascular deaths among the patients receiving the active Coenzyme Q10 treatment. The patients receiving the Coenzyme Q10 adjuvant treatment also showed significantly better scores on a biological marker for heart disease called NT-proBNP.

Coenzyme Q10 in the protection of the aging heart
In terms of exercise performance, quality of life, hospitalizations, and recovery from surgery, aging patients are at a disadvantage compared to younger patients. Dr. Rosenfeldt suggests that one big contributing factor to the difference in response based on age is the reduced bio-synthesis of Coenzyme Q10 in elderly people. Coenzyme Q10 is needed in sufficient quantities both for its role in the bio-energetics of the cells and for its role as an antioxidant quenching harmful free radicals.

Conclusions about Coenzyme Q10 supplementation
Based on their own research results and on their reviews of other research into the use of Coenzyme Q10, Dr. Rosenfeldt and his team reach the following conclusions: