Here, below, is what I have learned about Coenzyme Q10 over the years. CoQ10 is a naturally occurring redox compound that is essential for life in all humans. Dr. Karl Folkers called it “an essential bio-nutrient.”

In addition to doing clinical research into the efficacy of Coenzyme Q10 supplementation for some 40 years, early on in my career, I developed and refined a method of bio-electrical impedance measurement. I was able to use this non-invasive method to evaluate heart function in Black Lung Disease patients, in participants in the NASA Apollo program, and in open heart surgery patients in recovery. My message: use Coenzyme Q10 to ward off heart problems.

Writing in February, 2021, in a special issue of one of the leading cardiology journals: Journal of the American College of Cardiology, Texas cardiologists Albert E. Raizner and Miguel A. Quiñones, conclude that it seems “reasonable and justifiable” for cardiologists to use Coenzyme Q10 supplements with patients diagnosed with statin-associated muscle symptoms [Raizner & Quiñones 2021].

Absorption of CoQ10 Supplements Depends Upon the Formulation

Commonly, CoQ10 supplements come in 100-mg capsules. The capsules should be taken together with a meal containing some fat. Absorption of Coenzyme Q10 from supplements improves if the individual capsules are taken in divided dosages. Two times 100-mg a day at different mealtimes will give greater absorption than one times 200-mg at one meal [Singh 2005].

In a double-blind cross-over study of the bioavailability of various CoQ10 formulations, researchers found a superior absorption of a formulation of ubiquinone compared with ubiquinol [Lopez-Lluch 2019]. 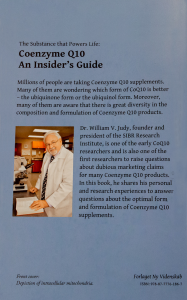 In this book, I describe the SIBR Research Institute lab studies and large dog studies that have led me to conclude that commercially available ubiquinol products are, for the most part, not stable. They tend to oxidize to the ubiquinone state. And, in any case, Coenzyme Q10 is absorbed in the ubiquinone form regardless of whether it is taken as ubiquinone or ubiquinol supplement.

In my book, I explain how the absorption of Coenzyme Q10 depends upon the dissociation of the raw material crystals to single molecules. At body temperature, the individual CoQ10 molecules tend to clump together into indigestible crystals. These crystals cannot penetrate the membranes of the intestinal absorption cells, cannot diffuse into the lymph circulation, and cannot be transported to the blood wall [Judy 2018].

In the Q-Symbio Study of the effect of CoQ10 adjunctive treatment on heart failure patients, researchers used 3 times 100-mg daily for two years [Mortensen 2014]. Compared to the placebo treatment, the adjuvant CoQ10 treatment was associated with the following significant outcomes:

Raizner and Quinones [2021] write that the safety of dosages of supplemental Coenzyme Q10 even higher than 300 mg per day over long periods is well documented. Adverse reactions are rare and mild; there may be occasional gastrointestinal upset.