Why the Ageing Brain May Need More Coenzyme Q10

As we get older, the brain changes physically. It begins to shrink in size after the age of 40 and especially after the age of 70. The prefrontal cortex – associated with cognitive function – is particularly susceptible to shrinkage. The volume of both white and gray matter is reduced in elderly individuals. With increasing age, there are reductions in the levels of the neurotransmitters acetylcholine, dopamine, and serotonin [Mantle 2021]. 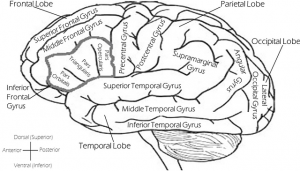 Coenzyme Q10 has important roles in cellular energy generation and cellular antioxidant protection in the brain. The ageing brain synthesizes less Coenzyme Q10 with the passing of the years. The big question in CoQ10 research is whether Coenzyme Q10 from supplements will cross the blood-brain barrier.

Moreover, increasing age is associated with mitochondrial dysfunction in the brain tissue cells. The mitochondrial dysfunction is characterized by 1) reduced ATP energy production and 2) increased generation of harmful free radicals. The resulting oxidative stress has been associated with normal ageing processes and with the development of neurodegenerative diseases [Mantle 2021].

Brain cells are big consumers of energy, using an estimated 20% of all energy used in the body. Coenzyme Q10 is an essential component in the process of cellular ATP energy generation and is an important antioxidant that protects cells against oxidative damage. In addition, Coenzyme Q10 has been shown to have anti-inflammatory effects [Mantle 2021].

Most of our daily CoQ10 requirement comes not from our diets but from endogenous bio-synthesis. Increasing age is associated with decreased bio-synthesis of Coenzyme Q10. The concentrations of Coenzyme Q10 in the heart, the liver, and the kidneys are significantly reduced at age 80 compared to age 20 [Kalén 1989].

CoQ10 levels in brain tissue have not been assessed in the same way, but it seems reasonable to assume that also in the brain, the CoQ10 concentrations decline with increasing age; hence, the need for CoQ10 supplementation [Mantle 2021].

Coenzyme Q10 is known to be present in all areas of the brain. The age-related decline in endogenous CoQ10 biosynthesis parallels the age-related changes in neurological function and the development of some neurodegenerative diseases. Accordingly, it is logical to ask whether CoQ10 supplementation can ameliorate cognitive decline in elderly individuals [Mantle 2021].

Both Coenzyme Q10 and selenium are necessary for optimal cell function in the body. The intake of selenium is low in much of Europe, and the endogenous synthesis of Coenzyme Q10 decreases as age increases.

With these facts in mind, Prof. Urban Alehagen and a team of researchers carried out a four-year intervention study using combined Coenzyme Q10 and selenium supplementation or matching placebos in a cohort of 443 Swedish senior citizens [Alehagen 2018].

The combined CoQ10 and selenium supplementation was also associated with improved health-related quality of life, and more days out of hospital.

The KiSel-10 study researchers did not evaluate the effect of the CoQ10 and selenium supplementation on measures of cognitive function or neurological function.