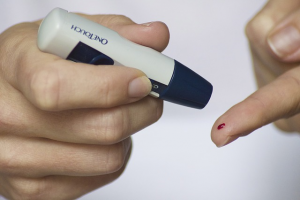 Some 21 million Americans have diabetes. Diabetes increases the inflammation that is associated with hardening of the arteries (called atherosclerosis). Atherosclerosis increases the risk of heart attack or stroke and the risk of chronic heart failure. Prolonged supplementation with Coenzyme Q10 may have beneficial health effects for diabetes patients.

Twelve weeks of supplementation with Coenzyme Q10 can significantly reduce the levels of oxidative stress associated with diabetes.

Oxidative stress and glutaredoxins
Oxidative stress is the condition caused by an excess of reactive oxygen species such as the peroxides, the superoxides, the hydroxyl radicals, and singlet oxygen radicals.  Some free radicals are themselves natural by-products of the body’s metabolism of oxygen.  Free radicals do have some useful functions within the cells, but they can be harmful to cells and DNA and lipids if their levels exceed the need for them and they begin to cause chains of chemical reactions.

In that case, the cells need the protection of antioxidants such the reduced form of Coenzyme Q10 (ubiquinol), the vitamins C and E, melatonin, the enzyme systems superoxide dismutase and catalase, and the thioredoxin and glutathione systems.  That there are so many different antioxidants is perhaps indicative of the extent of the problem of oxidative stress both inside the cells and outside the cells.

Glutaredoxins are small enzymes that are part of the glutathione redox system.  Glutathione itself is one of the major antioxidants produced by the cells for the purpose of neutralizing reactive oxygen species and other free radicals. Glutathione is also known to reduce Coenzyme Q10 molecules chemically – i.e. convert them from their oxidized form, ubiquinone, to their reduced antioxidant form, ubiquinol.

Interestingly, sub-category analysis of the study data showed that the significant lowering of the serum glutaredoxin activity levels took place in the diabetes patients who were not taking a statin medication.

Furthermore, because of the interference of the statin medication, it was difficult for the researchers to separate out and link the relevance of diabetes type 1 or type 2 to the lowering of serum glutaredoxin activity. However, the researchers noted that two of the four type-1 diabetes patients on a statin medication did not have any lowering of their serum glutaredoxin levels at all.

Summing up the study results

Disclaimer: The information presented in this article is not intended as medical advice and should not be regarded as such.