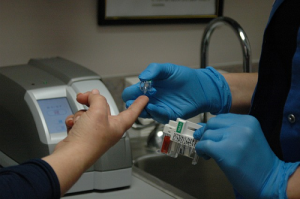 Coenzyme Q10 and diabetes
When we look at the documentation for the heart health effects of ubiquinone Q10 supplementation, a logical follow-up question is: what about ubiquinone Q10 supplementation for patients who have diabetes? If you have diabetes or know someone who has diabetes, then you may want to think about this conjunction of known facts:

Warning from the FDA about statins and diabetes
Moreover, the Food and Drug Administration has warned consumers that patients who are being treated with statin medications may have an increased risk of developing type-2 diabetes and may run the run risk of elevated blood sugar levels.

Type-1 and type-2 diabetes
In the case of the type-1 diabetes, the pancreas is not producing the insulin that is needed to move the glucose from the blood to the cells.  In the case of type-2 diabetes, the pancreas may be producing normal or reduced amounts of insulin, but there is a resistance by the cells to the effects of the insulin that is being produced.  In both cases — not enough insulin and insulin resistance — the unhealthy result is a build-up of glucose in the blood, what we call “high blood sugar” in everyday terminology.

What about Coenzyme Q10 and glycemic control?
Glycemic control is the medical term for the management of the levels of blood sugar in individuals diagnosed with Diabetes mellitus. Basically, the available clinical research seems to show that supplementation with ubiquinone Q10 at the rate of 100 mg or 200 mg per day does not interfere with the diabetes patient’s glycemic control and does not increase or decrease his or her need for insulin.

Good news about Coenzyme Q10 and diabetes
These research results are good news for patients with diabetes. They can show their physicians research evidence that it is safe for them – both type-1 diabetics and type-2 diabetics – to take a daily ubiquinone Q10 supplement. That means that supplementation with ubiquinone Q10 is safe for use as a prophylactic treatment against cardiovascular disease and as an adjunctive treatment for existing cardiovascular disease.

Coenzyme Q10 and diabetic cardiovascular risk
A 2015 study tested the hypothesis that supplementation with 200 mg of ubiquinone Q10 over a period of 12 weeks can improve endothelial function in type-2 diabetics. (Note: the term endothelial refers to the cells on the interior of the blood vessels and lymph vessels.)

Specifically, the researchers tested for the effect of Coenzyme Q10 on the plasma levels of the substance asymmetric di-methylarginine (ADMA). Elevated levels of ADMA are regarded as a cardiovascular risk factor.

The researchers randomly assigned 64 type-2 diabetes patients to an intervention group (200 mg Q10 daily) or to a placebo group. After 12 weeks, the results of the study showed a significant improvement in the levels of ADMA in the Q10 treatment group, as compared to the placebo group.

Metabolic control improved, oxidative stress reduced with Q10
In a study reported in 2014, researchers gave 100 mg of a ubiquinone Q10 supplement twice daily to 23 diabetes patients as part of a larger study. After 12 weeks of Q10 supplementation, the researchers could see that the Q10 supplementation was positively associated with decreased levels of the hBD2 bio-marker for inflammation, with increased cytokine production, and with improved NK cell activity.

Cytokines are small proteins that play an important role in the complex system of cell signaling and in immune function. NK cells are natural killer cells, white blood cells that play a decisive role in the body’s rejection of tumors and virus-infected cells.

Results from Australian studies of Q10 and diabetes
Two Australian studies from 2002, enrolling 74 and 40 patients respectively, in which the type-2 diabetes patients in the active treatment group received 200 mg of ubiquinone Q10 daily, showed that daily Q10 supplementation may improve blood pressure and long-term glycemic control and endothelial function in blood vessels in type-2 diabetics.

Results from Danish studies of Q10 and diabetes
The results from two randomized, double-blind, placebo-controlled studies previously reported on this website showed that 100 mg of Coenzyme Q10 daily does not affect glycemic control, does not reduce or increase insulin requirement, and can be administered to patients with type-1 and type-2 diabetes without risk of hypoglycemia.

If you or someone you know has diabetes and is worried about the risk of cardiovascular disease, please show your physician or cardiologist the list of medical journal articles that follows.