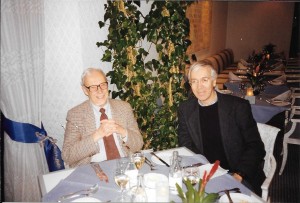 Dr. Svend Aage Mortensen (right), pictured here with Dr. Karl Folkers. Dr. Folkers determined the chemical structure of the Coenzyme Q10 molecule. He and Dr. Mortensen did the research establishing the link between low blood and biopsy tissue CoQ10 concentrations and the severity of heart disease.

Dr. Svend Aage Mortensen (1942 – 2015), M.D., DMSc. was associate professor and chief physician (cardiology) at The Heart Centre, Rigshospitalet, Copenhagen, Denmark.  He was the lead researcher on the Q-Symbio study of the beneficial effects of Coenzyme Q10 on morbidity and mortality in chronic heart failure.

Decreasing biosynthesis of Coenzyme Q10 beyond the age of 21
Dr. Mortensen knew that the body’s own production of Coenzyme Q10 peaks in a person’s early 20s and then decreases with increasing age [2].

Treatment option 2: Coenzyme Q10 in ischemic heart disease and angina pectoris
In the literature review to the KiSel-10 study, Professor Urban Alehagen laid out the evidence that dietary supplementation with Coenzyme Q10 has been shown to improve the heart muscle function and quality of life in patients with ischemic heart disease [1]. He speculated that the  protective effects of Coenzyme Q10 can be explained by antioxidant effect of the continuous reduction of ubiquinone.

With respect to the effect of Coenzyme Q10 on angina pectoris, Mortensen based his thinking on five double-blind, placebo-controlled studies.

Dr. Mortensen concluded that Coenzyme Q10 supplementation should be used as a first-line therapy in borderline/mild hypertensives and as an adjuvant therapy for hypertensives on conventional high blood pressure medications.

In 4 meta-analyses of randomized controlled studies of Coenzyme Q10 supplementation of heart failure patients, the results showed a mostly positive effect on left ventricular ejection fraction, sometimes with and sometimes without improvement of the patients’ NYHA functional class.

Where do we stand on Coenzyme Q10 and heart failure?
Altogether, 21 placebo-controlled studies of Q10 adjuvant treatment of heart failure patients have been carried out, and, in 18 of these trials, the results have shown positive effects.  In the other three trials, the researchers hypothesized that the results may have been skewed by a lack of patient compliance or by flaws in the research design.

Coenzyme Q10 supplements are safe, affordable, and shown to have positive effects on heart health.