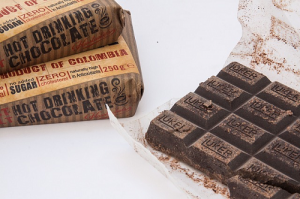 Yes, studies show that cocoa and dark chocolate have antioxidant properties. So do blueberries. And so too does Coenzyme Q10. In its oxidized form, Q10 facilitates the production of ATP energy units in the cells. In its reduced form, Q10 quenches free radicals.

Ubiquinone Q10
The oxidized form of Coenzyme Q10, the ubiquinone form, is the rather stable form.  Dr. Judy says that it can be stored in a cool, dry place for years without its losing its strength. The ATP molecule (adenosine triphosphate molecule) is thought of as the “molecular unit of intracellular energy.” Coenzyme Q10 plays a vital role in the formation of the ATP molecules.

Ubiquinone, the oxidized form of Q10, is thus ready to accept electrons.  It is ubiquinone’s ability to accept electrons that allows it to play an essential role in the electron transport chain in the cellular energy production process.  Coenzyme Q10 in its ubiquinone form shuttles electrons across the inner membrane of the mitochondria in the cells, and, in so doing, facilitates the conversion of ADP to ATP, the basic unit of energy in the cells.

Ubiquinol, the fully reduced form of Coenzyme Q10
Ubiquinol is the form of Coenzyme Q10 that has taken on two extra electrons.  As such, it is in position to be an electron donor.  It is very unstable and will readily act as a lipid soluble antioxidant.

Antioxidant function of Q10
Ubiquinol is well suited for its antioxidant function.  Its importance to the maintenance of human cells is that it gives up electrons that are used to quench (neutralize) superoxides and other free radicals.

Ubiquinol regenerates Vitamin C and Vitamin E
Ubiquinol’s function in the body is the important antioxidant function.  It quenches free radicals.  In addition, ubiquinol donates hydrogen ions that recycle vitamins C and E, thus converting these vitamins to their reduced and active forms as antioxidants. In other words, ubiquinol regenerates Vitamin C and Vitamin E in body, giving the cells even more protection against the damage that free radicals can cause.

The beauty of the Coenzyme Q10 redox molecules
In very basic terms, the ubiquinone Q10 molecules play an essential role in the production of energy units in the mitochondria of the cells in a process known as oxidative phosphorylation.  Then, having carried out this important function, the molecules of the reduced form of Q10, the ubiquinol form, stand ready to quench harmful free radicals.

Beneficial Q10 effects in human clinical studies
The importance of ubiquinone Q10 supplementation has been demonstrated in randomized, double-blind, placebo-controlled studies. These are studies that have been designed so carefully that the researchers can conclude that the differences in health outcomes between a Q10 treatment group and a placebo group must be attributed to the effect of the Q10 supplementation.

Statistically significant outcomes in Q10 clinical studies
In patients with chronic heart failure receiving an adjunctive Q10 therapy, we have seen significant improvement in symptoms and survival (the Q-SYMBIO study).

In elderly citizens (age range: 70 – 88 years), we have seen supplementation with a combination of ubiquinone Q10 and an organic selenium yeast result in significantly fewer cardiovascular deaths, improved quality of life, and fewer days spent in the hospital (the KiSel-10 study).

And in the case of Gulf War veterans suffering from chronic multi-symptom problems, we have seen that supplementation with ubiquinone Q10 can significantly improve symptoms and physical function (The Gulf War Illness study).