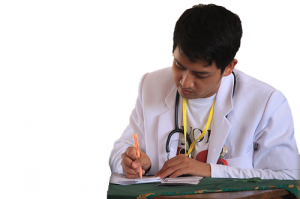 If you are taking Coumadin or Plavix or lots of aspirin, please ask your physician about taking a Coenzyme Q10 supplement — just to be on the safe side. The medical journal literature does not indicate that the Q10 supplement will affect the action of the anti-coagulant medication. The Q10 will benefit your heart, and the doctor will monitor your INR ratios.

Coenzyme Q10 is undoubtedly one of the safest supplements available.  There is absolutely nothing toxic about it.  University of Rochester Medical Center researchers have shown doses up to 2400 mg per day for 12 months to be safe. That is 8 times the dosage used in the Q-SYMBIO study and 12 times the dosage used in the KiSel-10 study, much more than any of us needs to take.

Ask your physician about the Q10– Just to be safe
However, anyone taking a prescription medication that is intended to slow down the clotting time of the blood should consult with his or her physician before beginning to take a Q10 supplement.  Just to be safe.

Q10 chemically similar to Vitamin K
The cautious thinking is that Coenzyme Q10 in its molecular structure is similar to Vitamin K, and Vitamin K is known to speed up blood clotting.  Theoretically, at least, a person who takes an anticoagulant medication might need his or her dosage adjusted by a physician if he or she begins to take a Q10 supplement.  But it is interesting to see that even a slight change of a molecule can cause major changes in its effect.  It seems very likely that the small differences in the two molecules explain why vitamin K has more of an effect on anti-coagulants than ubiquinone Q10 does.

Warfarin difficult to work with
Warfarin (generic name) is the most commonly used anticoagulant medication.  It is known by its brand names Coumadin and Jantoven.  There is also a warfarin derivative called Marevan.  Warfarin is intended to slow down blood clotting, and, okay, Q10 supplements might, conceivably, speed up blood clotting.

What does the medical journal literature show about Q10 and warfarin?  First of all, it shows that warfarin has been problematic for some 60 years now.  All by itself.  Even without any interactions with other substances.

Warfarin ranks high on the lists of medications that cause hospital admissions because of the medication’s adverse effects.  Physicians find it very difficult to keep patients within a safe and comfortable anti-coagulation range.

International normalized ratio (INR)
Physicians prescribing anticoagulants use a test of prothrombin time to monitor patients. (prothrombins are proteins in the blood plasma that are needed for clotting action)  The doctors then calculate an international normalized ratio (INR) based on the PT results.  They use the INR ratios to monitor patients taking anticoagulants.

Of course, in the end, the problem comes down to money.  More frequent monitoring of patients on warfarin would result in more stable INR ratios but would cost individuals and health insurance companies more money.  What is missing from the equation in the US is the factoring in of the cost of hospital admissions whenever there is too little monitoring.

Very few reports of any Q10 & warfarin problems
There are not many articles in the medical journal literature about Coenzyme Q10 and anticoagulants.  One article indicates that there have been four individual cases of warfarin patients’ needing their dosages adjusted, seemingly because of taking a Q10 supplement.

Another article reports on one single 72-year-old woman who appeared to be less responsive to her warfarin dosage when she started taking a Q10 supplement.

One article in the medical journal literature puzzles me.  Shalansky et al report that the use of Coenzyme Q10 has been associated with a few self-reports of increased bleeding.  If anything, Coenzyme Q10, being like Vitamin K, should increase the risk of clotting, not increase the risk of bleeding.  Possibly, Q10, which is not a blood thinner, could reduce the platelets’ tendency to stick together?  If that is the case, then the self-reports that Shalansky refers to might make sense?

So far, only one Coenzyme Q10 product has been tested for safe use with warfarin and reported in the medical journal literature. A study done by Engelsen, Nielsen, and Hansen indicates that 100 mg of Coenzyme Q10 daily does not affect the clinical action of warfarin.

The study, a randomized, double-blind, placebo-controlled study, showed that 100 mg of Coenzyme Q10 daily did not influence the clinical effects of the warfarin medication.  The warfarin patients in the study did not need to have their warfarin dosages adjusted during the 4-week period of Coenzyme Q10 supplementation.

Q10 and Plavix (clopidigrel)
I also did a search of the medical journal literature for Coenzyme Q10 and Plavix interactions.  Plavix is also used to prevent the formation of blood clots, usually after a heart attack or stroke.  I did not find any articles on the topic, but, as with the warfarin medications, you should check with your physician if you are taking Plavix and want to take Coenzyme Q10.

Q10 and Pradaxa
Similarly, I did a Medline search and found no information about any interactions between Pradaxa (dabigatran) and Coenzyme Q10.  Pradaxa is regarded as the next step up from warfarin.  It is intended to prevent blood clots from forming.

Animal study of Q10 and warfarin
An animal study done in China – with rats – probably deserves mention here.  Zhou and Chan showed that all of the rats administered both warfarin and Q10 maintained a stable condition throughout the entire experiment.  The researchers did notice, however, a decrease in hematocrit (hematocrit = ratio of the volume of red blood cells to the total volume of blood).

Q10 alone not affecting prothrombin time
When Q10 was administered to rats that were not on warfarin, the Q10 alone had no discernible effect on the prothrombin time or on the clotting factor VII activity.

Conclusion about Q10 and warfarin
Based on a review of the medical journal literature, it seems that you need not worry about asking your doctor to let you take a Coenzyme Q10 supplement even if you are taking warfarin.  He or she will continue to check your INR ratios and will adjust your dosage as needed.  But it seems quite unlikely that taking Coenzyme Q10 will result in your needing to have your warfarin dosage adjusted.

Zhou, Q., & Chan, E. (1998). Accuracy of repeated blood sampling in rats: a new technique applied in pharmacokinetic/pharmacodynamic studies of the interaction between warfarin and co-enzyme Q10. Journal of Pharmacological and Toxicological Methods, 40(4), 191-199.