Coenzyme Q10 and selenium best together 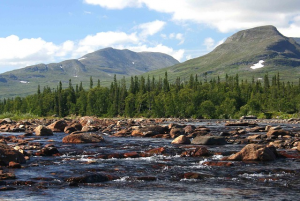 Certain regions of the world such as Sweden (pictured) and the other Scandinavian countries, the United Kingdom, New Zealand, and parts of China and the United States have selenium-poor soils and, thus, selenium-poor crops and foodstuffs. Without adequate selenium, the body cannot produce enough Coenzyme Q10 and cannot produce enough selenium containing antioxidant enzymes.

To date, Dr. Urban Alehagen and the Swedish researchers at Linköping University have published seven journal articles detailing various aspects of the heart health benefits of taking a daily combination of 200 micrograms of SelenoPrecise organic selenium supplements and 200 milligrams of Bio-Quinone Q10 (100 mg morning and evening).  It should be interesting to summarize the research results reported in these articles.

What do we need selenium and Coenzyme Q10 for?
The human body uses the trace element selenium to make the selenoproteins that are needed for the proper functioning of many body processes. It uses selenium to make the antioxidant enzymes that protect the cells against harmful free radicals. There is increasing research evidence that selenium protects against the development of atherosclerosis and certain cancers.

Coenzyme Q10 in the body plays an essential role in several ways:

The human body does produce Coenzyme Q10, but the production begins to decline with increasing age once a person reaches his or her 20s. Furthermore, the taking of statin medications has been shown to inhibit the body’s production of Coenzyme Q10.

There is a special interrelationship between selenium and Coenzyme Q10 in the body. People with inadequate intakes of selenium are at risk of producing too little Coenzyme Q10 on their own. People need adequate amounts of Coenzyme Q10 for their cells to produce the selenium containing antioxidant enzymes.

What, briefly, was the KiSel-10 study?
KiSel-10 was a prospective randomized, double-blind, placebo-controlled clinical trial of supplementation of elderly Swedish citizens with organic selenium yeast tablets and Coenzyme Q10 capsules for a 48-month period.

The researchers found that the effectiveness of the combined SelenoPrecise and Bio-Quinone Q10 treatment varied according to how severe the cardiac wall tension was.  Long-term combination supplementation was most effective in helping those elderly study participants who were in early to middle stages of developing cardiac dysfunction (quintiles 2 – 4).  The researchers speculated that the major beneficial effect of the combined supplementation came from the antioxidant functions of the selenium containing enzymes and the Coenzyme Q10 in its reduced form.

Follow-up articles about the effects of selenium and Coenzyme Q10 supplementation
In subsequent articles generated from analysis of the KiSel-10 study data, the researchers reported significant findings as follows:

Summing up the KiSel-10 results from a clinician’s point of view
Dr. Urban Alehagen and Dr. Jan Aaseth looked at the results of the KiSel-10 study and summed up the study’s relevance to medical doctors in clinical settings [5]. They focused in on the evidence that Coenzyme Q10 (in its reduced form) is an important antioxidant and that selenium is an essential component of important antioxidant enzymes.

Special interrelationship between selenium and Coenzyme Q10
The KiSel-10 study shows that there is an interrelationship between selenium and Coenzyme Q10 that can be exploited for therapeutic advantage if both substances are used together as a preventive measure for middle-aged and elderly persons at risk for developing heart disease.