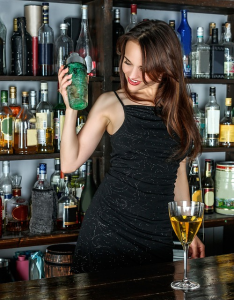 Actually, the best cocktail to reach for may be an antioxidant cocktail made with Coenzyme Q10, selenium, antioxidant vitamins, and omega-3 fatty acids.  Clinical studies have shown an anti-cancer effect associated with such a daily adjuvant treatment.

The results of the ANICA study – the Adjuvant Nutritional Intervention in Cancer study – showed that adjuvant treatment of high-risk breast cancer patients with a cocktail of nutritional supplements including Coenzyme Q10 and selenium can slow the development of the cancer and permit the patients to live longer with the cancer under control [Lockwood].

A study of Coenzyme Q10 supplementation and advanced cancer
In this article, I want to review the results of a study that was similar to the ANICA study in its approach to the treatment of end-stage cancer patients.

In 2009, Dr. Niels Hertz and Dr. R. E. Lister reported on the outcomes of a study that enrolled 41 end-stage cancer patients in Denmark over a period of nine years.  Forty of the patients were followed until death.  One patient was lost to follow-up and was presumed dead [Hertz & Lister].

The following forms of cancer were predominant among the cancer patients enrolled in the study:

These antioxidant supplements were taken in divided dosages, twice daily.

In addition, the cancer patients received physiological dosages of the B vitamins, of fish oil, and of gamma-linoleic acid (an omega-6 fatty acid).

Survival times of the end-stage cancer patients taking Coenzyme Q10 supplements
At the enrollment of each cancer patient, Dr. Hertz calculated the median predicted length of survival, using, for the most part, data from the National Danish Cancer Registry.  Dr. Hertz and Dr. Lister hypothesized that the number of patients surviving longer periods than predicted and the number of patients surviving shorter periods than predicted would be equal if the adjuvant treatment had little or no effect [Hertz & Lister].

No physical complaints for the cancer patients receiving Coenzyme Q10 and antioxidants
There were very few and very minor side effects associated with the Coenzyme Q10 and antioxidant treatment.  Mostly, the complaints were that there were too many pills to be swallowed and that some of the pills had an unpleasant odor (the selenium tablets).  Otherwise, there were no physical complaints associated with the adjuvant treatment.

Moreover, most of the cancer patients seemed to show a considerable improvement in their general well-being [Hertz & Lister].