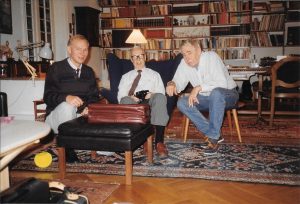 The ANICA study – the Adjuvant Nutritional Intervention in Cancer study – was an open clinical study conducted in Denmark in the 1990s.  It was an interesting study with thought-provoking results.  Its design reflected outside-the-box thinking.

The ANICA study enrolled 32 typical breast cancer patients who were classified high risk because their tumors had spread to the lymph nodes.  The 32 women received the standard breast cancer treatment at the time.  In addition, they were treated with an adjuvant therapy in the form of a combination of various micronutrients.

Dosages used in the Coenzyme Q10 and breast cancer study
The micronutrient combination that Dr. Knud Lockwood used in the ANICA study consisted of the following daily dosages:

Inspiration for the Coenzyme Q10 and breast cancer study
Dr. Karl Folkers was the American chemist who first determined the structure of the Coenzyme Q10 molecule in 1958.  Early on, he recognized the role of Coenzyme Q10 in cellular energy processes and in antioxidant protection of the cells.  In the 1980s and 1990s, he was leading clinical investigations into the effect of Coenzyme Q10 on the health of heart disease patients.

Dr. Knud Lockwood, a Danish oncologist in private practice in Copenhagen, agreed to start an investigation of the effects of Coenzyme Q10 on cancer patients together with Dr. Folkers.  In addition, Dr. Lockwood wanted to use a ”cocktail” of various micronutrient supplements, as listed above.

Dr. Lockwood’s thought was to give the breast cancer patients the benefit of the synergistic effect of the nutritional supplements.  In that respect, it is interesting to note two micronutrient interactions that have come to light more recently:

Note: Prostaglandins are hormone-like chemicals in the body that play a key role in inflammation.  Inflammation is a force in the development of cancer tumors.  Reducing prostaglandin production should reduce the extent of inflammation.

Results of the Coenzyme Q10 and breast cancer study
In the 1990s when the ANICA study was started, the prognosis for high-risk breast cancer patients was a 50% survival rate after five years [Bjørklund].

By the five-year mark, only six of the original 32 ANICA breast cancer patients had died, far fewer than the anticipated 16 patients (50% of 32).  Furthermore, two of the six deaths were not the direct result of cancer.  One death was caused by suicide, and another was caused by a fatal reaction to the administration of the cancer chemotherapy drug doxorubicin [Bjørklund].

At the five-year point of the ANICA adjuvant treatment with Coenzyme Q10 and other micronutrients, Dr. Lockwood could see that, for the most part, the breast cancer and lymph node tumors were still present.  The tumors had not disappeared entirely, but they had either shrunk or at least stopped growing.  The ANICA patients were living with the cancer under control.  There were no new metastases [Bjørklund].

Understanding Coenzyme Q10 and selenium and breast cancer
Geir Bjørklund thought the suppression of the synthesis of inflammation-promoting prostaglandins to be the primary mechanism underlying the success of the ANICA study’s adjuvant protocol.  Unusual inflammation is a biological marker for the progression of breast cancer.

Beyond the reduction of the bio-synthesis of prostaglandins, Bjørklund thought that the supplementation with Coenzyme Q10 and selenium helped to reduce the oxidative stress inside the tumors.  Breast cancer cells are usually subjected to higher levels of oxidative stress, which can further stimulate the malignant development.

In a future article, I want to write about a second open study in which 41 consecutive end-stage cancer patients were given a similar Coenzyme Q10 and selenium combination together with other antioxidant micronutrients [Hertz & Lister].

Folkers, K. (1996). Relevance of the biosynthesis of Coenzyme Q10 and of the four bases of DNA as a rationale for the molecular causes of cancer and a therapy. Biochem Biophys Res Commun, 224, 358–361.

Disclaimer: The information presented in this article is not intended as medical advice and should not be regarded as such.